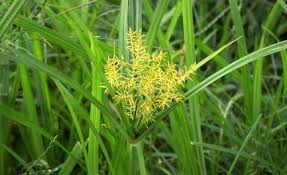 In these times, it isn't easy to find two people who agree on anything. Just about any issue can turn friends against each other and cause two strangers to argue, but we found one thing that we believe everyone in Central Florida can agree on; the votes have been counted, and everyone is against sedges.

They resemble grass but don't let those mostly green things fool you; sedges are weeds—some of the worst ones in the area. In this blog, we'll detail a few sedges that we've seen in some yards (mostly on properties next door to one that we maintain) over the last couple of weeks.

The color of sedges
Most sedges have things in common, like triangular stems and inconspicuous flowers. Like grasses, sedges produce a seed head at the top, but this is just for show; they spread by an underground stem called a rhizome.

There are two main species to worry about where we live, and they're both colors; yellow nutsedge and purple nutsedge. Both of them are like thieves on your lawn. They both steal water and nutrients from your grass.

Let's start with the purple one. It has a reputation for being the world's worst weed. Underground runners link plants together to form an ugly sedge rug. Plants can get up to over a foot tall, and its seed head has spikes that can easily pierce your skin. This weed loves sunny areas where soils are moist and sandy.

Now to the yellow one. This sedge's leaves can grow over two feet tall and usually come in groups of three that are an unsightly yellow shade. The seed head is yellow too. Unlike its purple cousin, yellow sedge doesn't form a weed chain across your lawn. This one enjoys the sun also but does better in dry soil.

Stopping sedges
In our neighborhoods, sedges are a constant threat. The first step in controlling them is to avoid providing an ideal habitat. These weeds thrive in soils where the turf is struggling to form a healthy root system. High foot traffic, excessive irrigation, and soil compaction are other risk factors.

The first thing you need to do is take care of those issues, which is a lot easier to write than do. Once you do, picking the sedges out by hand is an excellent way to get rid of it, but be careful; remember the spikes.

A healthy root system begins with a proper maintenance program, and we just so happen t have the best crews in the state. Our irrigation pros will also make sure your lawn gets the right amount of water during all of our Central Florida seasons. Contact us for a free estimate or if you just want someone to bad mouth sedges with.

Connect With Us On Social Media